Optimising The Use Of Alder Wood

Optimising The Use Of Alder Wood 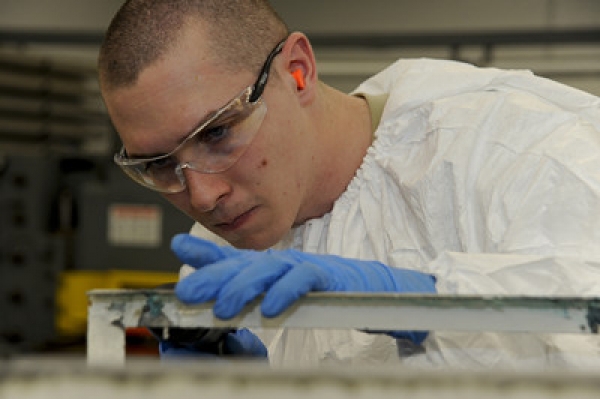 Optimising the sanding and coating processes of black alder wood can promote and support its use in furniture manufacturing. The surface roughness of the sanded specimens and the power consumption during sanding strongly depends on the grit size used. Thus, conducting a survey to find out specific grit size abrasives when applied to black alder wood is necessary. By Emilia-Adela Salca, Transilvania University of Brasov, Tomasz Krystofiak and Barbara Lis, Poznan University of Life Sciences

The furniture industry has been rapidly developing and diversifying. It strongly leads to the implementation of a certain strategy shift from a traditional business model to a model based on value generation.

Such an approach was supported by the competitive advantage of qualitative, innovative, and ecological products that are differently granted when compared to other products.

Furniture units manufactured from wood-based materials are very common on the market, but solid wood furniture still keeps its popularity. When compared to composites, attributes such as reliability, environment-friendliness, good looks, and value are used to describe solid wood.

Each piece of wood needs to experience a long process until it reaches the most appropriate state for interior design. Sanding is considered an important process prior to finishing in furniture manufacturing, among others.

The product quality is influenced by rational and optimal fabrication based on some specific technologies. To implement such optimisation, two certain criteria should be simultaneously fulfilled, namely, having the best surface quality and the best cutting performance.

Usually a sanding process starts with a rough grit size used for a rapid and deep sanding and then finer grit sizes are applied for the final finishing phases, to achieve a homogeneous substrate for subsequent coating applications.

The substrate preparation prior to the varnish application and the coating product present a specific influence on the properties of the final finished product. The wood grain may raise, twist, and lift during the wetting and sanding, which can be reduced with a proper sanding process.

A rough surface produces an increase of the mechanical interlocking area between the coating and wood, while the adherence of varnish to the wood surface is reduced by the increase of wood equilibrium moisture content.

Gloss is one of the parameters used to assess the final quality of a product; it is mainly influenced by the chemical composition of the coating, but also by the substrate preparation.

Varnishes present different levels of gloss depending on their type and application system. It was shown that polyurethane and polyacrylic resins retained a high gloss even under thermal stress conditions, while for powder coatings a low gloss level was found.

The wood coating industry currently faces the influence of environmental regulations. Therefore, a clear focus on water-borne systems, high solids, UV-cured coating, and powder coating is recognised in the furniture sector. Interior coatings should be carried out with respect to the VOC (Volatile Organic Compounds) regulations, to present abrasion and chemical resistance and to have a high gloss effect.

In the case of exterior woodwork, the focus is on durability and protection against humidity, sunlight, and microbiological attack. It was found that modifications applied to the coating material or the substrate can significantly improve the performance of exterior clear coatings.

Several studies on coating properties were mostly performed for cellulose varnishes, solvent-borne or water-borne, which have been applied to different wood materials.

Such coating applications are common mostly for indoor furniture purposes. For humid areas, such as for kitchen and bath cabinets, vinyl wrap has been used, but water-borne and UV varnish products are expected to be applied instead. Water-based coatings and UV-cured technologies are considered efficient solutions for wood coating operations.

Small- and medium-sized furniture manufacturing companies mostly use wood-based materials in their production line, but also use various local species, such as oak, ash, and cherry, in addition to other common hardwood species.

Black alder wood (Alnusglutinosa L.) is a native species in Romania and could have potential as a raw material for furniture manufacturing companies.

There is great potential in the wood furniture sector in Romania, considering that the furniture production export rate increased from 57.6 percent in 2008 to 86 percent in 2016.

The market is mature and the consumers have started to inform themselves and behave as in the Western culture. Such aspects in furniture production were supported by the residential market, which was revived through the construction of large districts, and thus general consumption was encouraged.

Black alder wood, which is an under-utilised species, also presents potential for furniture manufacturing, based on its great workability and properties. Due to its pleasant appearance, alder wood can also be successfully used as substitute for valuable species in various art restoration works.

Therefore, the objective of case study was to optimise the sanding and coating processes of black alder wood to promote and support its use in furniture manufacturing.

Test on Sanding and Coating of Alder Wood

Experiments were carried out with black alder (Alnusglutinosa L.) wood, a diffuse-porous species that is not commonly used for furniture products in Romania. A total of 20 flat sawn boards supplied by a local sawmill were planed and then cut at dimensions of 300 mm × 6 mm × 95 mm.

The samples had an average basic density of 520 kg/m3 and a moisture content of 8 percent. Prior to their surface preparation, the samples were divided into four groups, each one of five samples, and conditioned in a room with a temperature of 20 ± 2 °C and relative humidity of 50 percent ± 5 percent.

The sanding of the samples was performed under industrial conditions on a wide belt-sander machine. The specimens were first subjected to calibration with a 60 grit size abrasive. Four parallel sanding systems were then applied by employing various grit size abrasives manufactured of corundum grains.  The calibration step and each individual sanding sequence were performed with the same cutting parameters.

Two types of varnish, namely UV varnish and a water-borne (WB) varnish were applied to the samples after their surface preparation by sanding.

All samples were coated with two layers, and a light sanding of 220 grit size abrasive was applied between the finishing steps to obtain a smooth surface. Two samples per sanding system group and varnish type were used for coating. One control sample per group was kept as a reference.

The curing process was performed separately as a function of the varnish type. Besides, the dry film thickness was only determined for both types of varnish products according to the specialty literature.

The measurements of the coating adherence were performed in ambient conditions by the pull-off test with the help of the PosiTest-AT adhesion tester, in accordance with the ISO 4624 standard.

A two component silane-epoxy resin of Jowat 690.00 type was used to glue small steel dollies with 20 mm diameters on the film surface. After one week of curing, incisions were made around the dollies in order to prevent failure damages close to the tested area.

The adhesion strength was recorded by the PosiTest device, which involves the vertical withdrawal of the cylinders with a constant detachment speed. Five measurements were taken from each coated sample. The delamination effect was visually assessed for each coated sample.

The power consumption and the surface roughness of the samples after each individual and final sanding step were determined. Such data were used to evaluate and to select the optimal surface preparation system prior to the coating application.

The results illustrated that the wood industry sector does not belong to the list of the highest power industrial consumers, but the sanding process of wood is considered to consume the most among all the processing steps.

It was proven that the power consumed for sanding the wood increased with the belt speed and the feed speed, while a low variation was noticed for the increase of the cutting depth.

Overall power consumption increased with the decrease of grit size diameter for both approaches, such as the individual grit size step and final sanding, respectively.

The values of all the roughness parameters followed the same decreasing trend with the increase of the abrasive grit size.

Moreover, a tangential wood surface may contain either large or narrow areas of earlywood and latewood, which explains the large variation of the obtained results when sanding with course grit size abrasives.

At the same grit size, hard wood species present better quality surfaces compared to soft wood species. It is also a fact that the wood surface roughness is inversely proportional with wood density, which plays a much more important role than the species anatomy.

Abrasives of 60 and 80 grit sizes produce a crushed wood layer on the surface; thus, the wood tissue is forced to enter the cavities and therefore produces their obstruction.

As a result, when using low feed speeds, the wood cells that remain uncut are blunt and bent, generating a better roughness, while for high feed speeds, some peaks are formed but they are considerably attenuated for finer grit sizes when applied at light feed speed.

In practice, such surfaces are subjected to successive sanding steps with 100, 120, 150, or 180 grit size abrasives, depending on their destination and further coating application system.

Previous studies revealed that water-borne varnishes adversely affect the smoothness of the surface and, as a result, reduce the glossiness.

In practice, high gloss is required for the visible parts of furniture more than for others. Such sanding with a grit sequence of 60, 120, and 150 grit size abrasives is usually used under industrial practice. Thus, it is also recommended for black alder wood to obtain final UV-coated wood surfaces for value-added products in furniture manufacturing.

Results of the Survey

The surface roughness of the sanded specimens and the power consumption strongly depends on the grit size used.

Overall power consumption increased with the decrease of grit size diameter, and all roughness parameters were found sensitive to the grit size. To obtain better glossiness values, the UV-cured varnish was preferred to the water-based product, while in terms of adherence, small differences were found between the two varnish products.

The coating performance was significantly influenced by the varnish type. The sanding with a grit sequence of 60, 120, and 150 grit size abrasives was found to be optimal when applied to black alder wood, and it is recommended to obtain performant UV-coated wood surfaces for furniture products.

This work was carried out for black alder wood, an under-utilised species that could have potential as a raw material for the manufacture value-added furniture units.